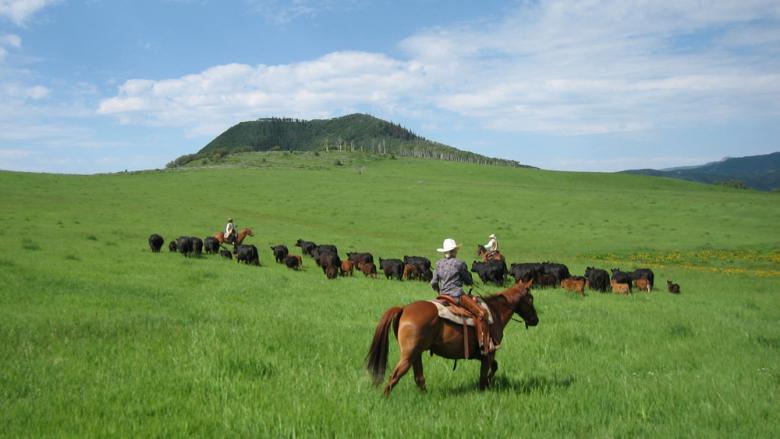 Ninety-four ranches are on the way in 10 states prone to herdsmen/farmers clashes.

The National Economic Council (NEC) chaired by Vice President Yemi Osinbajo has approved a 10-year National Livestock Plan which will cost about N179 billion. All 36 state governors are members of the NEC.

About N70 billion of the budget will disbursed between now and the expiration of President Muhammadu Buhari’s first four-year tenure next year.

The project is expected to take off in Benue and Nasarawa states any time from now.

These disclosures were made by NEC representatives, including Governor Samuel Ortom, Agriculture and Rural Development Minister Audu Ogbe, and the Coordinator of the plan, Dr. Andrew Kwasari, at a session with editors in Abuja.

The session was facilitated by the Open Society Initiative for West Africa (OSIWA) – a non-government organisation.

Ogbe, who said “open grazing is no longer viable”, said cattle rearers would be the greatest beneficiaries in the next few years.

He also said the Federal Government has no intention of seizing anybody’s land by force.

A technical presentation of the NEC-approved plan, including the enumeration of the six key pillars on which the plan is built, was made by Kwasari.

He said: “In addition to loss of human lives, it is estimated that Nigeria loses about $14 billion (N5.04 trillion) annually to herdsmen-farmers’ conflicts.

“Domestic annual milk production in Nigeria is only 400 million litres, resulting in supply

gap of about 700 million litres.

“To fill these growing gaps, Nigeria spends a large amount of its scarce foreign exchange resource to import livestock products, with average of $480.6 million (N173.3 billion) worth of milk imports alone per year.

“The National Livestock Implementation Plan is a mediation plan stemming from meetings and recommendations of the Federal Ministry of Agriculture and Rural Development (FMARD) and the National Economic Council (NEC) in 2017 as regards state interventions following the incessant pastoralist-farmer conflicts.

“We are going to have 94 ranches in 10 states. We have received 21 gazetted grazing reserves from seven states. Plan focuses on pilot intervention in the frontline states Adamawa, Benue, Edo, Ebonyi, Kaduna, Nasarawa, Oyo, Plateau, Taraba, and Zamfara.

“A Ranch Design Plan has also been proposed in models of various sizes clustered in 94 locations in the 10 pilot states. We will have clusters of 30, 60, 150, and 300 cow ranch models in a location within the donated and gazetted grazing reserves.

“The total spending for the 10-year period is slightly in excess of N179 billion. Funding for the first three years of the pilot phase is about N70 billion.

“The ranch is also designed as an integrated business which makes provision for (a) the development of commercial crop production to support livestock through the supply of quality fodder and other feed materials, (b) the formation of producers into clusters to create viable ranch herd sizes, and (c) creation of cooperatives to facilitate improved access to inputs, infrastructure, finance, markets, and support services.”

The minister said there was no going back on the creation of ranches, dismissing the insinuation that the government planned to seize land from owners or communities.

He said the conflicts between herdsmen and farmers were not about anti-open grazing laws.

“The truth is that open grazing is no longer viable. We may not end it in one day, but it has to end and government has to help. This conflict is not peculiar to Nigeria alone; it’s happening in Argentina; it happened in the U.S . in the 19th century, in Pakistan and others. So, this is what we should have started doing 20 years ago. We didn’t and that’s why we are where we are.

“Lastly, the government has no intention of seizing anybody’s land. So, the idea that somebody is going to forcefully take the land is not true. In Fashola’s farm , there are Fulani residents there who speak Yoruba fluently.

“One of them said, ‘we have found peace here’. They produce fresh milk for Friesland Capina. If you see the turnover of Friesland Capina during their annual turnover, you will be amazed. These are the issues.

“The ECOWAS Treaty says free movement of human, animals and goods. We had a meeting with the ECOWAS ministers here. We are going to have another. We will tell them, ‘you must do what Nigerians want’. Roaming around is no longer an answer. We may have to shut our borders. How large is the Nigerian border space? 4037 square kilometres is the landmass from Sokoto to Badagry and from Borno to Calabar. Added up it’s plus 830 kilometres of coastline. Half of our borders are open . Should we build a wall? People wander in and out. So it is a very complex thing.

“When we implement this thing, how do we prevent cows from West Africa marching in when they like with no respect for our tradition and cultures? These are the problems we face.

In these ranches, we can then say nomadic education can work, the Fulani are in clusters. By 5am, they milk their cows and sell to the milk processing plants which will be installed there. They begin to realise that it pays to stay.

“There is an experiment we did in Kano. The firm tried to settle a number of herdsmen in a location and they gave scholarship to their children. If your male child is in school, they buy your milk for N120 per litre but if your girl child is in school, they buy it for N140 per litre and believe me, every morning Fulani send their children to school while they milk their cows. They have to be in one place. So a lot of incentives will come and we will use the cow dungs to generate electricity.”

He said: “We have over 180,000 IDPs in eight camps and over 5,000 people living with relatives. We have had massive support from all over the world and this is attributed to the media, and I commend this.

“ I believe that after this interaction, there will be more to do. The Presidency is not sleeping. They have devised various ways in giving us additional information to help us shape our opinions and also express our opinions on how best this challenge can be surmounted.

“A committee had earlier been set up, headed by my colleague from Ebonyi and, unfortunately, he is not here. He and members of his committee visited Benue, Nasarawa, Taraba, Adamawa, and Zamfara states. Of course, they came back with a report, which was considered and far-reaching decisions were taken as to how they will summon this challenge.

“I’d like to appreciate the Vice President, Prof. Yemi Osinbajo for his able leadership and for helping us to come this far. People say from where I come that ignorance is darker than the night and so when you’re informed, you’re in a better position to represent issues properly.

“For me, as the governor of Benue State and someone who has been affected by recent challenges of farmers and herdsmen, I must commend the media in Nigeria. You have done very well, and maybe for other states that have been affected as well, you have represented the issues well.”

General Manager of Capital FM Mercy Njoku, said the engagement was designed to enable the media to understand the herdsmen-farmers conflicts.

She said: “It is important for the press to have a clear understanding of what is happening.

“I know every media person wants peace, stability and development.

We want a country where there will be peace, security and economic boom.”

In a bid to ease economic burden and support growth across Lagos State, the commercial hub of Nigeria, the state government has reduced land use charges and other penal fees.

Dr. Rabiu Olowo, the Commissioner for Finance, disclosed this on Wednesday in a statement titled ‘Speech delivered by the honourable commissioner for finance at a press briefing on the 2020 new land use charge law.’

Lagos State Government said land use charges and other fees are revised down to pre-2018, adding that the state will henceforth uphold the 2018 method of valuation.

“In addition to this, there is also a 48 per cent reduction in the annual charge rates,” Olowo stated.

While the annual charge rate for agricultural land was revised down by 87 per cent from 0.076 per cent to 0.01 per cent.

The Federal Government imported petrol valued at N2.37 trillion into the country in thirteen months, according to the Nigerian National Petroleum Corporation (NNPC).

On Wednesday, the corporation said revenue from the sales of white products stood at N2.39 trillion between May 2019 and May 2020.

It, therefore, stated that petrol contributed about 98.84 percent or N2.37 trillion of the total sales generated during the period.

In May, the corporation said it realised N92.58 billion from the sale of petrol. NNPC said the product was sold through its subsidiary, the Petroleum Products Marketing Company (PPMC).

According to the May 2020 version of the corporation’s Monthly Financial and Operations Report quoted by Kennie Obateru, the Group General Manager, Public Affairs Division, NNPC, 950.67 million litres of white products (only petrol) was sold by PPMC in the month.

This, he said “comprised 950.67 million litres of Premium Motor Spirit, popularly called petrol, only, with no Automotive Gas Oil or Dual Purpose Kerosene.”

“There was also no sale of special product in the month.”

Nigeria continues to depend on importation for its petrol supplies due to local dilapidated refineries that have failed to operate at optimal level despite billions of dollars budgeted for maintenance yearly.

Experts have said petrol importation is one of the main reasons the nation’s foreign reserves continues to struggle, especially at a period when oil prices are trading at a record low with broadly low demand for the commodity.

Nigeria’s foreign reserves is presently hovering around $36 billion, down from its record high of $45 billion attained in June 2019. The decline has also impacted the ability of the Central Bank of Nigeria to support the Nigerian Naira.

The Naira has been devalued by 15 per cent in the last four months and was recently adjusted from N361 a US dollar to N381 per US dollar on the Investors and Exporters forex window to ease the pressure on the reserves.

The Minister of Transportation, Chibuike Amaechi, on Tuesday said he specifically urged the National Assembly to be careful about the ongoing probe of Chinese loan agreements.

The minister who appeared in a live television programme with the Minister of Justice/Attorney-General of the Federation, Abubakar Malami, said China is becoming a bit apprehensive about releasing additional loans to the country.

He said, “You know, I specifically urged the National Assembly to please be careful about this probe on the loan agreements. It is because we are trying to make an application for the Port Harcourt Maiduguri rail.

“If nothing else is happening, you know that our brothers are already saying that we don’t want to do any rail project in the South-East.”

He added, “Now that we are planning to say that they should give us some loan for us to construct Port Harcourt to Maiduguri, and we are about to go to cabinet for approval, you are now shouting these terms are bad, Chinese people are wicked.

“How will they give you the money? I have documents to the effect that we are getting signals that they are becoming a bit apprehensive on whether we are doing this because we don’t want to pay them back.”

Amaechi said the nation must learn to pay back procured loans, saying the $500 million loan obtained for the Abuja-Kaduna railway was presently being serviced.