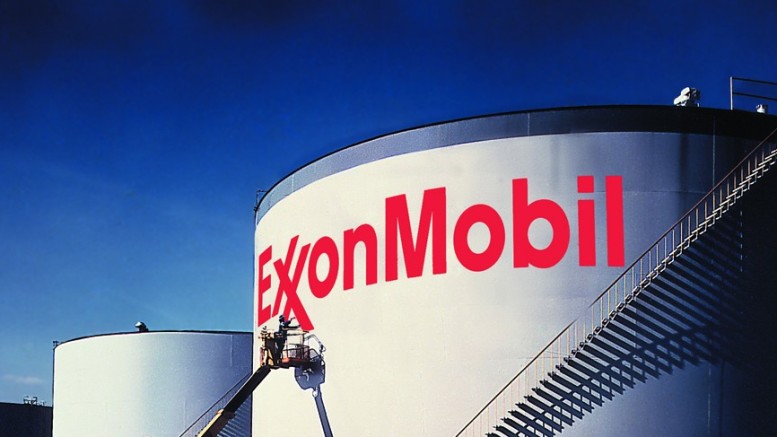 U.S. oil giant, ExxonMobil Corporation, will pay up to N350 million each to some of the sacked Nigerian employees as severance payments, driven by years of service and additional redundancy gratuities.

It was also learnt that of about six per cent of the workforce affected by the right sizing carried out by the firm, the average payment per person hovers around N140 million, including redundancy pay of about 36 months basic salary.

This is coming as the Minister of State for Petroleum Resources, Dr. Ibe Kachikwu has invited the protesting oil workers under the aegis of the Petroleum and Natural Gas Senior Staff Association (PENGASSAN) for a meeting tomorrow to resolve the labour crisis.

The aggrieved oil workers of the company on Thursday shut down the company’s corporate head office in Lagos indefinitely in protest over the attempt by the company to sack over 150 workers.

The protesting workers had accused the company of flagrant violation of the Nigerian Oil and Gas Industry Content Development (NOGICD) Act by deploying expatriates to take over jobs for which there is local capacity.

The workers had also insisted that the Managing Director of the company, Mr. Nolan O’Neal, must be relieved of his duties.

But top officials of the company who spoke off the record at the weekend said that 2016 was a challenging year for Mobil Producing Nigeria (MPN), a Nigerian affiliate of ExxonMobil, with the profitability of the affiliate being the worst in recent history.

According to one of the officials, while costs are down, revenue is down by almost three quarter, even as the company has spent more than its earnings to ensure that its contractors and employees were paid.

“Some of the resultant effects on the business have included scaled down operations, reduced personnel, uplift project deferments, and contract renegotiations. Against this backdrop, any responsible company would take steps to ensure survival,” he said.

He described the company’s ongoing redundancy programme, which he said was targeted at lower performing employees, as one of the steps taken by the company towards survival.

Another official of the company further revealed that the employees impacted accounted for only about six per cent of the workforce that were offered an enhanced benefits package in excess of the provisions of the collective bargaining agreement (CBA) signed with the in-house union.

He added that post-employment support programmes to support their transition period from the company were also included in the package.

“The severance payments driven by years of service and additional redundancy gratuities are in some cases up to N350 million for an employee. For the total population affected, average payment per person hovers around N140 million.

On the allegations of non-compliance with the extant laws and agreements levelled against the company, the official argued that neither the Nigerian labour law nor the CBA with the union requires alignment between the company and the union in the event of redundancy actions.

According to him, the CBA (Clause 23b) states that “whenever redundancy actions are contemplated, the company shall inform the association of the intended action and the association may bring to the company’s attention any problems that it believes are involved”.

He added that the Nigerian Labour Act (Clause 20a) also states that “in the event of redundancy, the employer shall inform the trade union or workers’ representative concerned of the reasons for and the extent of the anticipated redundancy”.

The official revealed that the union disagreed with the company’s notification, and also abandoned the provisions of the CBA, which specifically states in Clause 13b that “if a dispute arises during the subsistence of the agreement, either party shall comply with the current law governing Trade Disputes in Nigeria and neither party shall resort to arbitrary strike action or lockout”.

He accused the workers of disregarding the provisions of the CBA to embark on actions that “border on harassment of fellow employees, breach of security, health and safety protocols, destruction of the company’s property and other actions that impacted the general welfare of all personnel including their members”.

“We even understand that they shut down power to the staff clinic, and chased away medical personnel on duty, thereby putting the lives of patients at risk,” he added.

He further disclosed that even with the intervention of Kachikwu, who personally appealed to both the union chairman and secretary, extending invitations for a meeting tomorrow, the union resorted to taking steps that might impact production activities within 24 hours.

On the allegation by the workers that the company was hiring expatiates to replace Nigerians, the official disclosed that the company had demobilised 40 per cent of its expatriates in the wake of the current challenges.

According to him “We are at our lowest ever number of expats in country.”
Despite the clarification provided by a source in ExxonMobil, the Nigerian Union of Petroleum and Natural Gas Workers (NUPENG) said at the weekend that it would begin a three-day nationwide warning strike by January 9, 2017, against the anti-labour practice of the international oil companies (IOCs) operating in the country.

The South-west chairman of the union, Alhaji Tokunbo, told newsmen in Lagos that the warning strike was inevitable because all other options had failed.
According to Korodo, “We are not gaining anything by going on strike because it is not a joyful thing but as a union, we have to protect and fight for the welfare of our members.

“We have sensitised the public and also sought the intervention of the federal government over the anti-labour activities of the IOCs on our members but we are not getting results.

“Our members that put in their best within the duration of time they worked were not paid their severance packages by their employers when they sacked them.

“This is a big slap and it will not be allowed. What they are practising here in Nigeria, they cannot practise in their countries, so that is why we say enough is enough. We will take the bull by the horn,” he said.

According to the News Agency of Nigeria (NAN), the chairman said that the issues leading to the planned warning strike were inherited by the present administration, while some occurred within the same government.

He said: “Two hundred and fifty members of our union were affected by the divestment by Chevron Nigeria Ltd., in the South-East.

“And this is giving us serious concern because they cannot feed their families. The Minister of Labour, Sen. Chris Ngige, asked all the parties to maintain the status-quo ante and we complied because we respect the authorities.

“But the IOCs seem to be above the law or more powerful than the government; they failed to maintain the status-quo ante that was amicably agreed to by both parties.

“Chevron had to tell our 250 members that their contracts with it were no more binding on it because it cannot trace the company that employed them as contract workers for it.

“The minister said that Chevron had to pay the sacked workers but its management refused to comply. It got to a time when Sen. Ngige called for a meeting in Abuja to mediate; at times its representatives would not show up.
“We would risk our lives and resources and go to Abuja, no IOCs member would come.

“Even when their representatives came, they would be those without a mandate to represent the organisation just to frustrate the discussion,” he said.

He said all the IOCs in the country were involved in the anti-labour practices. “We do not want the public to experience the strike as though we are unnecessarily punishing Nigerians.

“That’s why we are using this period to protest by asking tanker drivers to hang green leaves on their trucks and our members to wear red cloth.

“By next year, if our grievances are not addressed within this period, we will proceed on a three-day warning strike. If the government and people concerned are not able to apprehend and resolve it, we may be forced to turn the strike into an indefinite one,” he said.

Govt Agencies Remitted N687.82bn Operating Surplus in Nine Years Agencies of the Federal Government have remitted a total of N687.82bn to the Consolidated Revenue Fund…