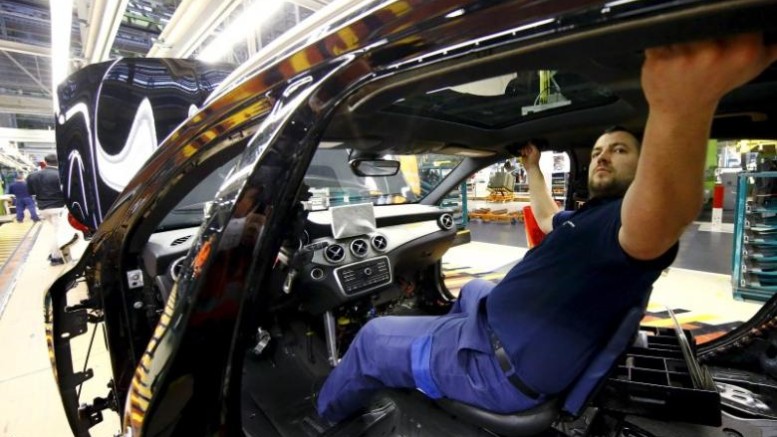 An employee of German car manufacturer Mercedes Benz works on the interior of a GLA model at their production line at the factory in Rastatt, Germany, in this January 22, 2016 file photo. REUTERS/Kai Pfaffenbach/Files

The Euro-area business growth expanded at its slowest pace in almost 2 years, according to the Purchasing Manager Index report released on Friday.

Business activity in the region dropped to 52.6 from August 52.9, even though a reading above 50 indicates growth, 52.6 was the lowest level recorded since January 2015.

“It’s a pretty disappointing end to the third quarter. We have seen unevenness between manufacturing and services but also between the nations,” said Rob Dobson, director of economic indices at Markit.

Years of loose policy have failed to get inflation near 2 percent target of the European Central Bank.

“It does seem to be a very tentative hint at rising inflation though, meaning that it can still be a while to come before meaningful price growth will return,” said Bert Colijn at ING.

According to Markit the PMI pointed to the bloc’s GDP expanding around 0.3 percent in the third quarter — in line with the projected low growth rate that analysts forecast will need fiscal policies rather than additional monetary policy.

“You are seeing some inflationary pressures coming back into the system – they are not particularly strong but given the low inflation period we are coming out of, any movement up will be heartening for the ECB,” Markit said.