The General Manger, Corporate Communications of EKEDC, Mr Godwin Idemudia, said on Friday in Lagos that the debt was an accumulation of unpaid bills over time.

Idemudia said EKEDC had no option than to disconnect the complex after all appeals to the management to pay the accumulated bill proved abortive.

The EKEDC spokesman, however, promised that supply would be restored if the management paid part of the debt.

A senior official of the National Theatre, who did not want his name mentioned, said that the management would pay the bill as soon it received its allocation.

He said the management could not pay from of its generated revenue because “the money into the Treasury Single Account as directed by the Federal Government.”

He, however, assured that the management would pay part of the bill soon.

Meanwhile, a correspondent who visited the National Theatre reports that the outage had taken its toll on patronage to the popular relaxation area at the complex.

The traders said that many of their customers had stopped coming since the power outage started more than two weeks ago.

“Each of us spends more N1,500 daily to buy iced block to chill drinks.

“The darkness at the theatre has paralysed our businesses; no customer is willing to eat or take a hot drink,” one of the traders said.

They appealed to the National Theatre management to pay part of the debt so that power supply would be restored to the complex. 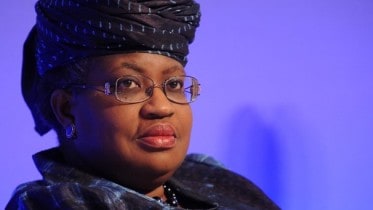 Okonjo-Iweala Re-appointed Chair of Gavi Nigeria’s former Minister of Finance & Coordinating Minister for the Economy, Dr. Ngozi Okonjo-Iweala, has been re-appointed as the Chair…