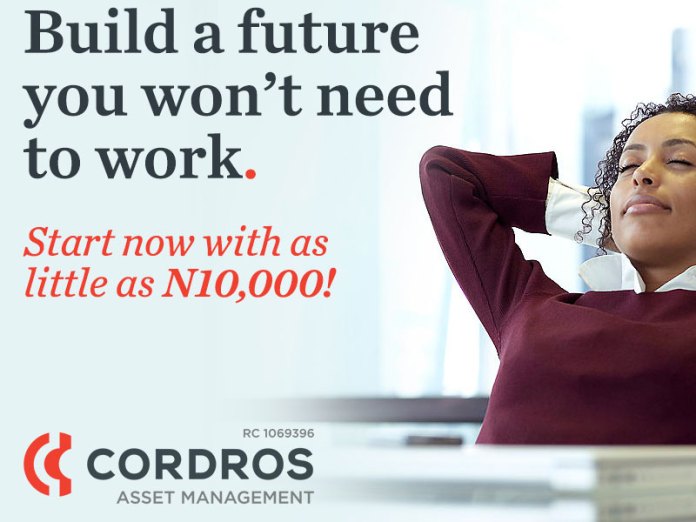 Cordros Capital says the current rally in the country’s stock market does not, in any way, suggest a bubble scenario.

The company, in its 2018 outlook for the country, said the market was largely driven by fundamentals.

Presenting the outlook to newsmen in Lagos, the firm’s Head, Research and Strategy, Mr. Christian Orajekwe, said the equities gain of 2017 was the market’s first in three years of cumulative 40 per cent loss, adding that in dollar terms, the return was around 25 per cent.

Orajekwe said, “Back-to-back gain of more than 80 per cent total is not a new phenomenon. Bull markets do not die of old age.

He said the equities market recorded a strong January start this year like the case of 2007, 2010, and 2013, driven by a moderate improvement in the macro environment, stable to modest corporate earnings growth, modest improvement in portfolio inflows over 2017, marginal moderation of fixed income and treasury yields, and modest election concerns.”

To this end, the Head, Investment Banking, Cordros Capital, Mr. Femi Ademola, urged investors to cherry-pick stocks, and hold 2017 position and watch out for Q4 2017 and Q1 2018 earnings.

-Commenting on the 2018 budget, he said early presentation was good albeit the likelihood of an early passage and signing of the budget.

“Oil revenue assumptions are realistic. Non-oil revenue estimates, particularly taxation and Internally-Generated Revenue are very ambitious. Other revenues are also ambitious, although they have strongly supported gross revenue in past years,” he said.

“A 50:50 split between domestic and external borrowing was observed. The risk of deficit exceeding budget is low to moderate. Except on extreme difficult revenue condition, priority will be given to capital expenditure,” Orajekwe added.

Major catalysts for agriculture companies in 2018, he explained, include: supportive macroeconomic environment, energy diversification and expansion drive while the major risks include: policy reversal, unfavourable weather condition and security threat.