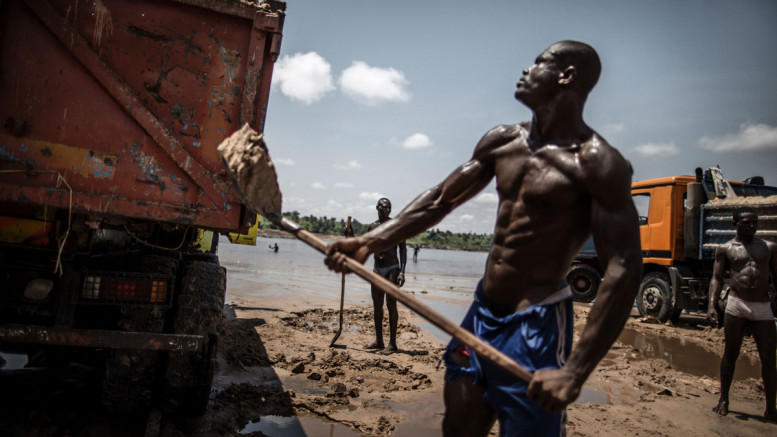 Sand diggers are seen loading trucks at a quarry on the banks of the Congo river in the Kombe district of Brazzaville on March 28, 2016. / AFP PHOTO / MARCO LONGARIMARCO LONGARI

The Republic of Congo’s main opposition group urged the government to allow an International Monetary Fund-supervised audit of state-owned companies to establish the magnitude of their debt.

“Until a genuine audit is carried out by neutral auditing firms, under the strict supervision of the IMF, no one can tell the true figure of Congo’s debt,” Matthias Dzon, leader of the Patriotic Union for National Renewal, said by phone Thursday from the capital, Brazzaville.

Oil-producing Congo owes creditors at least $9.14 billion, equivalent to about 110 percent of gross domestic product, according to the IMF, which is considering a bailout. Debt in the central African nation has more than tripled since 2010 because of a series of pre-financing deals by the state oil company that allegedly have been used by people close to or part of President Denis Sassou Nguesso’s family as vehicles for corruption, according to advocacy group Global Witness.

The IMF estimate of Congo’s debt is based on information provided by Congolese authorities, the lender said in a statement in October. The amount may have been underestimated because the audits were carried out by government entities, Dzon said.

Congo ranks among the world’s 20 most corrupt nations, according to the anti-graft campaign group Transparency International. Sassou Nguesso has ruled the country since the end of a civil war in 1997, and previously led the nation from 1979 to 1992.

The government plans to create a special unit within the judiciary to combat corruption and will seek help from the IMF to train Congolese judges in fighting white-collar crime, Communications Minister Thierry Moungalla said earlier this month.