The African Export-Import Bank (Afreximbank) and the Indonesia Eximbank yesterday in Bali, Indonesia, entered into an agreement to commit up to $100 million to support businesses and trade activities between Indonesia and African countries.

The agreement, signed on the sidelines of the Indonesia-Africa Forum is expected to support African imports from Indonesia and African exports to Indonesia in order to stimulate increased trade flows between Africa and Indonesia and spur economic growth and development.

The Executive Vice President, Business Development and Corporate Banking, Amr Kamel, signed the agreement on behalf of Afreximbank, while the Chairman and Executive Director of Indonesia Eximbank, Sinthya Roesly, signed on behalf of her institution.

Indonesia Eximbank will also provide financing support to Indonesian buyers of African goods, with Afreximbank acting as the Bank of the African exporters. In addition, Indonesia Eximbank will support short-term trade transactions emanating from African buyers of Indonesian products, including through provision of confirmation lines to the African Banks on the back of a trade confirmation guarantee facility provided by Afreximbank.

Kamel said the agreement could make an important contribution to the “economic development of our respective regions by leveraging the capabilities of our respective institutions to promote and finance trade between Indonesia and Africa, thereby enhancing South-South trade.”

Debts: Nestoil to Sell Some Shares in Neconde’s OML 42 Asset 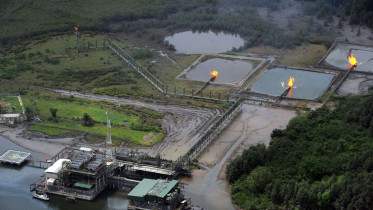 Malabu Oilfield Licence, Nine Others to Expire in 2020, 2021 Ten oil block licences, including the controversial Oil Prospecting Licence 245, held by international and…

US to start Deporting Illegal Migrants Next Week