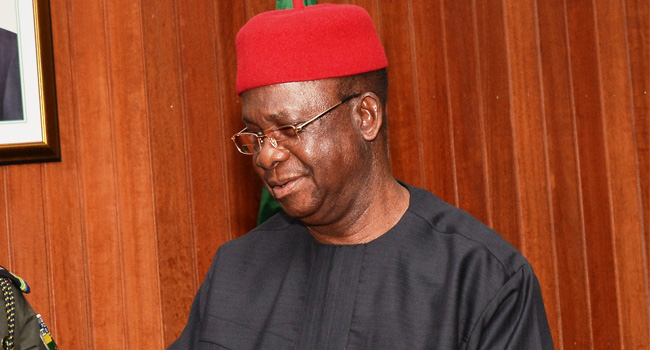 The Economic and Financial Crimes Commission has intensified its probe of the immediate past Governor of Ebonyi State, Martin Elechi, over some alleged fraudulent contracts approved by his government.

Earlier in the year, the EFCC had received a series of petitions against Elechi’s government, causing the commission to invite the ex-governor and his son, Nnanna.

In continuation of the probe, the EFCC arrested a former Commissioner for Public Utilities in the state, Mr. Benjamin Okah, for his alleged role in a $12m contract awarded to a United States-based firm, Califco Group, in 2012.

The EFCC said in a statement by its spokesman, Mr. Wilson uwujaren, that the state government paid $10.8m to the firm in 2012 as mobilisation fee but the project was abandoned.

The anti-graft agency said Okah allegedly received N83m as gratification through two of his companies.

The statement read, “The EFCC on Monday arrested a former Commissioner for Public Utilities in Ebonyi State, Benjamin Okah, for alleged abuse of office and collecting gratification to the tune of N83m.

“Investigation has revealed that both the Abuja and Ebonyi State addresses of the said company are fictitious. In the course of investigation, it was discovered that the former commissioner allegedly collected gratification from the company in the sum of N83m between July 30, 2012 and December 30, 2014, through his companies: Global Victory Allied Company and Mahco Mega Nigeria Limited.

“Investigation in this matter continues.”

Again, Buhari Orders NNPC to Search for Oil in North

Dangote Cement to Invest N4bn in Projects in Ogun State